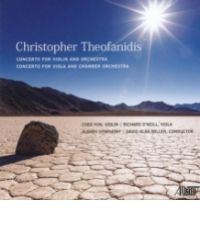 Christopher Theofanidis' music has been performed by many of the world's leading performing arts organizations, from the London Symphony, Philadelphia Orchestra, and the New York Philharmonic to the San Francisco Opera, Houston Grand Opera, and the American Ballet Theatre. A two-time Grammy nominee, Theofanidis is currently on the faculties of Yale University and the Aspen Music Festival. This recording of two of his concertos is performed by the Albany Symphony conducted by David Alan Miller, which is known for its commissioning and performances of music by American composers. Chee-Yun, violin soloist is a winner of the Young Concert Artists International Auditions and has performed with many of the world's foremost orchestras. Viola soloist Richard O'Neill is the newly appointed violist of the Takács Quartet. An EMMY Award winner, two time Grammy nominee and Avery Fisher Career Grant recipient, he has appeared as soloist with the world's top orchestras.