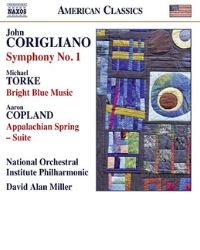 These three works represent the first recording for Naxos by the National Orchestral Institute Philharmonic, which is composed of elite conservatory students from across the United States and abroad. The chosen works reflect the richness and variety of the American repertoire. A work of immense poignancy and power, John Corigliano’s Symphony No. 1 is a commemoration of friends of the composer who died during the 1980s and ’90s. Michael Torke’s Bright Blue Music evokes rich lyricism couched in the composer’s favorite key of D major. The suite from Copland’s Appalachian Spring is one of the great, quintessential American works.